Warlock! is an interesting little game from Greg Saunders of Fire Ruby Designs that has been made explicitly to do what Warhammer Fantasy roleplaying does but without the headache that is officially-published Warhammer Fantasy rpgs. I'll be running it for the first time shortly and so to continue practicing coding as well as to make it easier for my distant players to have access to the bountiful character creation tables, I've built a bunch of generators here. This includes content from the Core book, Earn Your Crust (mostly additional careers), Compendium I and Compendium II.
Obviously go by the books, they're nice and come in an ideal form factor, but even without them or with a different game many of these tables would be useful. Also be sure to check out their very active Fire Ruby discord if you want to learn about the game, there are a lot of great people on there. 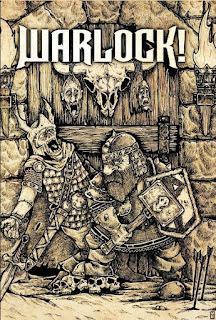 Creating a character only requires rolling (what I've called) Essential Characteristics, rolling a few d6s to see which Careers you have available to pick from, and assigning skills.
All skills start at a value of 4 and players can immediately choose ten of the them to set equal to 5 and ten others to set equal to 6. If they'd like these choices to be random as well, they can roll a Background. They then distribute 10 points among the skills their chosen career provides, up to the career maximum.
Talents are an optional feature from one of the Compendiums that seems neat. Same with the Pluck characteristic.
Everything other generator is just personalization and entirely optional.
Posted by diregrizzlybear at 3:00 PM