The Lady of the Dead hasn't always been. It is said that she was once a mortal woman who, in a time of war between the gods, saw an opportunity to seize their power for her own. She attracted a boundless multitude of zealots to Her cult of ascendence who willingly gave their lives to her arrogance. But this seed of hubris blossomed in turn among her cultists as each sought too to gain divinity. This corruption spoiled her plots, destroying her and banishing her followers from the face of the world. Truly it is folly to try to be as the gods.

Yet that was not her only story. Another story tells of her time in the Underworld. It tells of her fading memories and power evaporating in those abyssal depths and her desperate struggle to be what she was destined. Her fight caught the attention of the Lord of the Dead who admired her spark in that most gray of places. So he watched her and slowly came to admire her before eventually making her into his queen. He had thought to make her a plaything. But her will was the mightier. Through some lingering magic, through the strength of her rebuilt identity, through incredible pride of his own, she wrenched his mantle away. The Lord of the Dead was now the Lady of the Dead. Some fires are so bright they burn even the gods.

Written for OSE/LotFP because I've previously contended that the most interesting parts of 5e are the subclasses and that the more interesting among them (sans base class) could make something cool. This is from the Warlocks and Wizards Unearthed Arcana. Also, I don't like the default cleric and I wanted to see if I could cover the same ground more evocatively.

Read more »
Posted by diregrizzlybear at 10:48 AM No comments:

I was recently pointed to Ron Edward's Sorcerer by Justin at Aboleth Overlords and it's been a pretty interesting read. In particular, it hits some of the same notes that I've been tinkering with in my own projects, particularly in the Sorcery and Sword supplement. In the process of reading, however, I found myself going back and forth trying to remember how this mechanic interacted with that process. This was doubly troublesome trying to connect what I had read in Sorcerer to the changes in Sorcerer and Sword and then to the changes made by fan hacks like this interesting looking Nausicaa hack.

So I did what I usually do in such a situation: make my own rules summary. It's not comprehensive and leaves out any sort of GM advice or process, but it covers the bulk of what I'd have to explain to a player if I were to run it. In case anyone else might find such a thing useful, I've included it below.
Read more »
Posted by diregrizzlybear at 4:56 PM No comments: 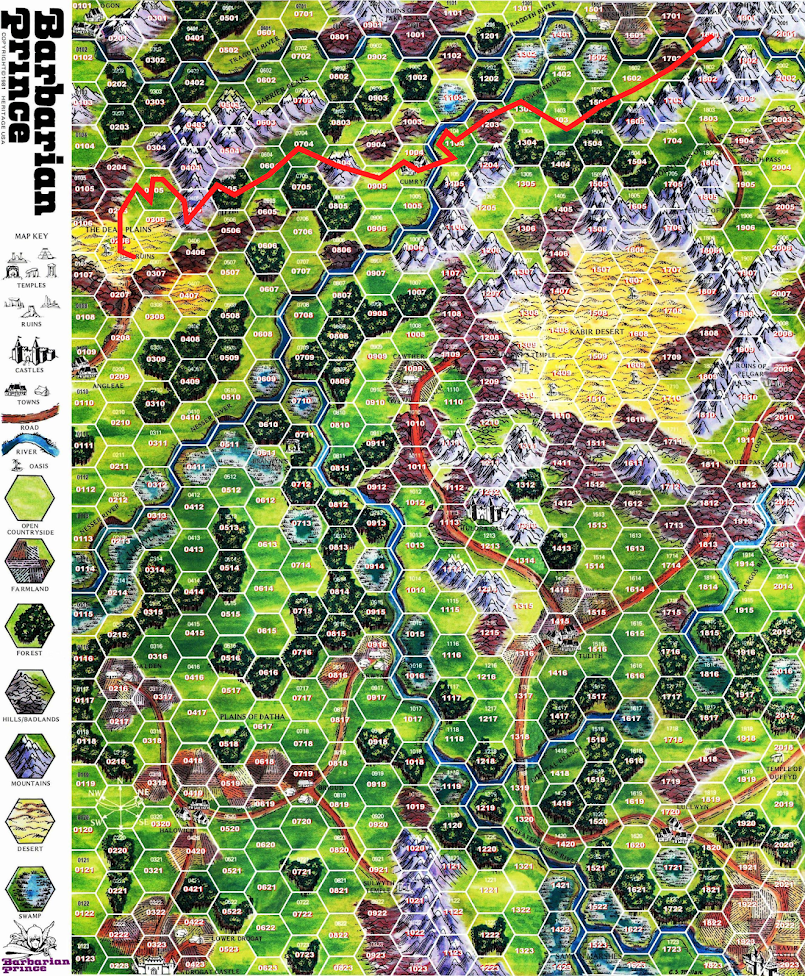 Cal's journey. He spent a lot of time lost or stuck.
Read more »
Posted by diregrizzlybear at 1:34 PM 3 comments:


What are hit points? I wanted to know because I was thinking about how they benefit from ability scores. DH Boggs has some things to say with quotes from Gary and Dave. Or we can compare texts. Here are a few:

These hit points represent how much damage (actual or potential) the character can withstand before being killed. A certain amount of these hit points represent the actual physical punishment which can be sustained. The remainder, a significant portion of hit points at higher levels, stands for skill, luck, and/or magical factors. {snip} Let us suppose that a 10th level fighter has 55 hit points, plus a bonus of 30 hit points for his constitution, for a total of 85 hit points. This is the equivalent of about 18 hit dice for creatures, about what it would take to kill four huge warhorses. It is ridiculous to assume that even a fantastic fighter can take that much punishment. The same holds true to a lesser extent for clerics, thieves, and the other classes. Thus, the majority of hit points are symbolic of combat skill, luck (bestowed by supernatural powers), and magical forces. (PHB p. 34)

Each hit scored upon the character does only a small amount of actual physical harm - the sword thrust that would have run a 1st level fighter through the heart merely grazes the character due to the fighter's exceptional skill, luck, and sixth sense ability which caused movement to avoid the attack at just the right moment. However, having sustained 40 or 50 hit points of damage, our lordly fighter will be covered with a number of nicks, scratches, cuts and bruises. It will require a long period of rest and recuperation to regain the physical and metaphysical peak of 95 hit points. (DMG p. 82)

A piece of my previous post mentioned that I had yet to write a means of changing Pendragon traits after that had been rolled. I want to be able to easily adjust distribution of character traits on the fly, for reasons of player character race, culture, class, alignment, or any other factor I can imagine. For example, Chaotic characters were classically more associated with demons, the unsavory, and generic villainous Bad Guys, and such people are also typically associated with various flaws, both physical and spiritual. So if the character generator determines that this is a Chaotic character, the code needs a means of biasing the scores negatively. Meanwhile, Dwarves may stereotypically (and now actually, per the dictates of the RNG) exhibit certain behaviors more often than the baseline-human, and so adjustments to make them more selfish, honest, vengeful, and valorous would be appropriate.

I wrote and tested my code on JSFiddle which I have found is a very convenient environment in which to code. You can see it here, colored and indented for readability, the code in question. This simple function "incTra" takes in two elements when it is called, a trait and a value. The body of the code first combines the 13 vices with the 13 virtues so that they can be trivially accessed at the same time in the variable "all". Then it takes the traits element pointed to when called and converts it to lowercase purely for functionality and to dodge potential future goofs. Then the meat of the function:

Through some playing around with it I found that an adjustment of 2 caused the results to skew one way more often at a reasonable frequency. Obviously, with a range of 3-18, and money numbers showing up in the ranges of 3-7 and 14-18, adjusting it by as much as 4 ensures that extreme results occur exceptionally rarely (adjusting +4 ensures that negative results occur only on a roll of 3 in 3d6, an occurrence with just .46% chance). A bias of 2 would produce negative results approximately 7%, while an adjustment of just 1 would move that up to 16%, which is actually really close to the 1-in-6 chance favored by Gary's game.


Posted by diregrizzlybear at 10:00 AM No comments:

At some point, the PCs are going to fight something. While combat may or may not be a fail state, it's going to happen regardless. Traditionally, this has involved a complicated minigame with rules and procedures entirely unlike those found outside it. A move and an attack are an assumed default in most D&D-alikes. Special tricks are always a pain to adjudicate, initiative is always a hassle, and it always takes too long if it gives you very many options at all. The way many choose to play is then ultra-light and heavy on adjudication, in contrast to the method chosen by the world's largest RPG and its imitators, which are cumbersome and, well, still heavy on adjudication. Some of the more popular OSR games, like the GLOG, attempt to bridge the divide by giving PCs a limited number of options while hard-capping endless growth.

I want to try to create a set of rules for running Shadowrun using Knave, tentatively called Crave unless I can come up with something better. It wouldn't be strict by-the-book Catalyst Game Lab Shadowrun, but more a pastiche or reimagining of it, both because of the needs of the system and also because I simply don't like some of it. But to make it work would require some reworking of some basic assumptions of old school games, which typically focus on gritty early modern adventures. In that vein, here are some ideas that I've been noodling and discussing on the discord but are as yet untested. I just needed to get everything out of my head an on a sheet. Hopefully, someone else might find something useful. Some or all of this may need to work itself in any eventual hack.


Read more »
Posted by diregrizzlybear at 4:17 PM No comments:

An Idea For Useful Languages in RPGs

Languages are never fun in tabletop roleplaying games. People have come up with numerous ways to handle them, and their methods become especially absurd in games where languages are handled by leveled skill points ("Sorry, professor, but I can't learn Spanish until I go shank some goblins and steal their loot."). LotFP has a linguistic skill, for example, that you roll to determine whether or not you know a language; max the skill and you know everything. AD&D had "alignment languages" and people the first part of that term was even worse than the second. Some effort has been made to at least make the languages interesting. Meanwhile, most people just dispense with languages entirely. Here's a proposal.

Read more »
Posted by diregrizzlybear at 8:54 AM 9 comments: